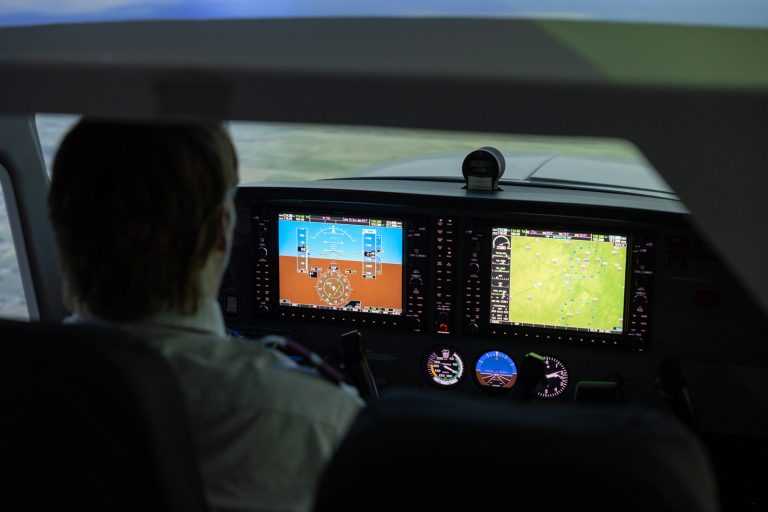 No matter how high you expect your aeronautics ambitions to take you, you won’t go far until you learn to speak and understand the specialized language that industry insiders use. Reference this handy glossary to gain a basic understanding of some of the most widely used aviation terms.

Above Ground Level (AGL) – Height above the physical land or water surface beneath an aircraft.

Adverse Yaw – The opposite force exerted against the nose of an aircraft while turning. AKA, the airplane nose tends to yaw toward the outside of the turn. This is caused by the higher induced drag on the outside wing, which is also producing more lift. Induced drag is a by-product of the lift associated with the outside wing.

Aeronautical Information Manual (AIM) – An official Federal Aviation Administration (FAA) publication that provides instruction regarding the proper operation of aircraft in the US National Airspace System.

Aileron – Hinged control surfaces at the trailing edge of the aircraft wings that help the pilot keep the aircraft balanced and control the roll on the longitudinal axis.

Air Speed Indicator (ASI) – A cockpit instrument that calculates and displays aircraft’s speed in miles per hour and/or knots.

Airfoil – The cross-sectional shape of an airplane’s wings (with a curved surface at the top and a flat surface at the bottom, such as a wing, propeller, rudder, or even a trim tab) which generates lift through aerodynamic force.

Altimeter – An instrument found in a plane cockpit that uses atmospheric pressure to calculate and display the aircraft’s MSL (mean sea level) altitude.

Altitude – The height of an aircraft, measured either as AGL (above ground level) or above MSL (mean sea level).

Bernoulli Principle – A principle of fluid dynamics described by the scientist Daniel Bernoulli. In the field of aerodynamics, it explains how air flowing over an airfoil can generate lift by creating high air pressure below the wing to push the wing, and the aircraft, upwards and low pressure above the wing.

Commercial Pilot Certificate - Also known as a commercial pilot license, once certified, pilots can receive payment for their services. Examples of those services are flight instructing, banner towing, single-pilot small cargo flights, and aerial photography. The FAA requires a certain minimum of flying hours, depending on your training facility, to qualify for this exam.

Certified Flight Instructor (CFI) – An FAA credential held by a commercial pilot who has passed additional tests and practical exams that allow him or her to train other pilots.

Check Rides - The name for the FAA practical test needed to obtain aviation certifications and ratings. Each test is performed with a Designated Pilot’s Examiner (DPE). The FAA also refers to “Check Rides” as the Airman’s Practical Test Certification.

Crosswind – Any wind that blows perpendicular to an aircraft’s course, measured in knots.

Downwash – Air that pushes downward on a wing. Particularly strong as an airplane ascends.

Downwind Leg – A flight course parallel to the runway but heading in the opposite direction.

Drag – Air that moves opposite but parallel to an aircraft’s course.

FAA Part 141 - There are several types of schools for pilots, two common schools are known as Part 141 and Part 61 schools. This term refers to the Federal Aviation Regulation sections that the school operates under. Part 141 schools are approved and evaluated by the FAA. These schools are very structured and help students train to meet strict federal requirements.

Federal Aviation Administration (FAA) – The division of the Department of Transportation concerned with aviation. It operates Air Traffic Control and regulates everything from aircraft manufacturing to pilot training to airport operations in the United States.

Federal Aviation Regulations (FAR) – The rules and regulations that govern aviation, as established by the FAA.

Firewall – A fireproof barrier between the engine and the fuselage and other sections of an aircraft.

Flaps – Movable surfaces, via hinges, on an airplane’s wings that alter their airfoil properties and enable the pilot to control drag and lift at low speeds.

Flight Plan – A detailed plan that pilots must file with flight service stations. Information in a flight plan includes the number and type of the aircraft as well as its estimated plan of departure and arrival, time in route, and the passengers and/or cargo aboard. Flight plans can be filed in person or via radio, telephone, or internet.

Go-Around –The circle path that an aircraft takes when its pilot or air traffic control makes it circle around the runway for another attempt to land. AKA, this is what is called from the tower when they terminate a landing approach.

Gross Weight – The fully-loaded weight of an aircraft, also known as “takeoff weight,” which includes the combined weight of passengers, cargo, and fuel.

Horizontal Stabilizer – A small lifting surface on the tail of an airplane that helps it remain stable in flight.

Instrument Flight Rules (IFR) – The FAA rules that govern flight under low-visibility conditions, when pilots must rely on instruments within the cockpit of their aircraft to navigate correctly. Pilots must have an Instrument Rating (IR) to fly under these conditions.

Landing Gear – Wheels and other components in the undercarriage of an aircraft that assist in takeoff, taxiing, and landing while providing structural support.

Navaid – A portmanteau of “navigational aid,” which encompasses all aviation equipment and tools that help the pilot navigate.

Pattern –The direction of aircraft traffic around an airfield, supervised by air traffic control and communicated via radio.

Pitch – The movement across an airplane’s lateral axis, which affects its front-end during ascent and descent.

Pilot in Command (PIC) – The pilot in charge of the aircraft’s operation and safety during the entire fight process.

Private Pilot Certificate - Pilots usually start with a private pilot certificate, also commonly known as a pilot license, that allows them to carry passengers. These are normally single-engine two to four-seat aircraft.

Rating – Part of various aviation certifications, this is an official statement that established special pilot conditions, limitations, and privileges.

Roll – The banking movement of an aircraft to the left or right, which pilots control using wing ailerons.

Rudder – A vertically mounted surface on the tail of an airplane that controls the movement of its nose to the left and right.

SMOH – An acronym for “since major overhaul.” Used to mark the total cumulative operating hours of an aircraft engine.

Slipstream – The propulsive air stream that an aircraft propeller or rotor generates.

Threshold – The beginning of the runway designated for authorized aircraft to land.

Throttle – Controlled by the pilot, this valve in a carburetor or fuel control unit determines aircraft speed by channeling a specific amount of fuel in the engine.

Thrust – The force that a jet engine or a propeller generates to push an aircraft forward.

Transponder – A transmitter-responder device on an aircraft that automatically gives details about a craft’s altitude and position in response to a query signal from transmitters on the ground. Transponders identify aircraft to air traffic controllers and can also be part of collision avoidance systems.

Vertical Speed Indicator (VSI) – A cockpit instrument that uses shifts in atmospheric pressure to calculate and display the aircraft’s rate of ascent or descent.

Vertical Stabilizer – The large swinging surface on the tail of an airplane that helps it remain stable in flight.

Wind Shear – An abrupt change in the speed and/or direction of wind.

Yoke – Similar to a steering wheel on a car, the yoke allows the pilot to turn the aircraft and adjust both its pitch and its altitude.

Interested in training to become a pilot, an aircraft mechanic, or an avionics technician? You’ll certainly need to acquaint yourself with most if not all of the aviation terminology in the glossary above. Overwhelmed by learning a new set of terminology to communicate? Never fear! Even the most seasoned aviation professional was once in your shoes. With a little practice, you’ll be speaking like a seasoned industry veteran in no time.