For over 90 years, Spartan has trained aspiring pilots and military from around the world. Students at our campus in Tulsa, OK train in a new fleet equipped with modern avionics with instructors that emphasize safety and practical skills.
Accredited College, ACCSC
Earn an Associate of Applied Science degree in as few as 17 months
Financial Aid available for those who qualify
Student Housing Available
Part 141 Reduced Flight hour requirement to 1,250¹
Private Pilot Course (Examining Authority) 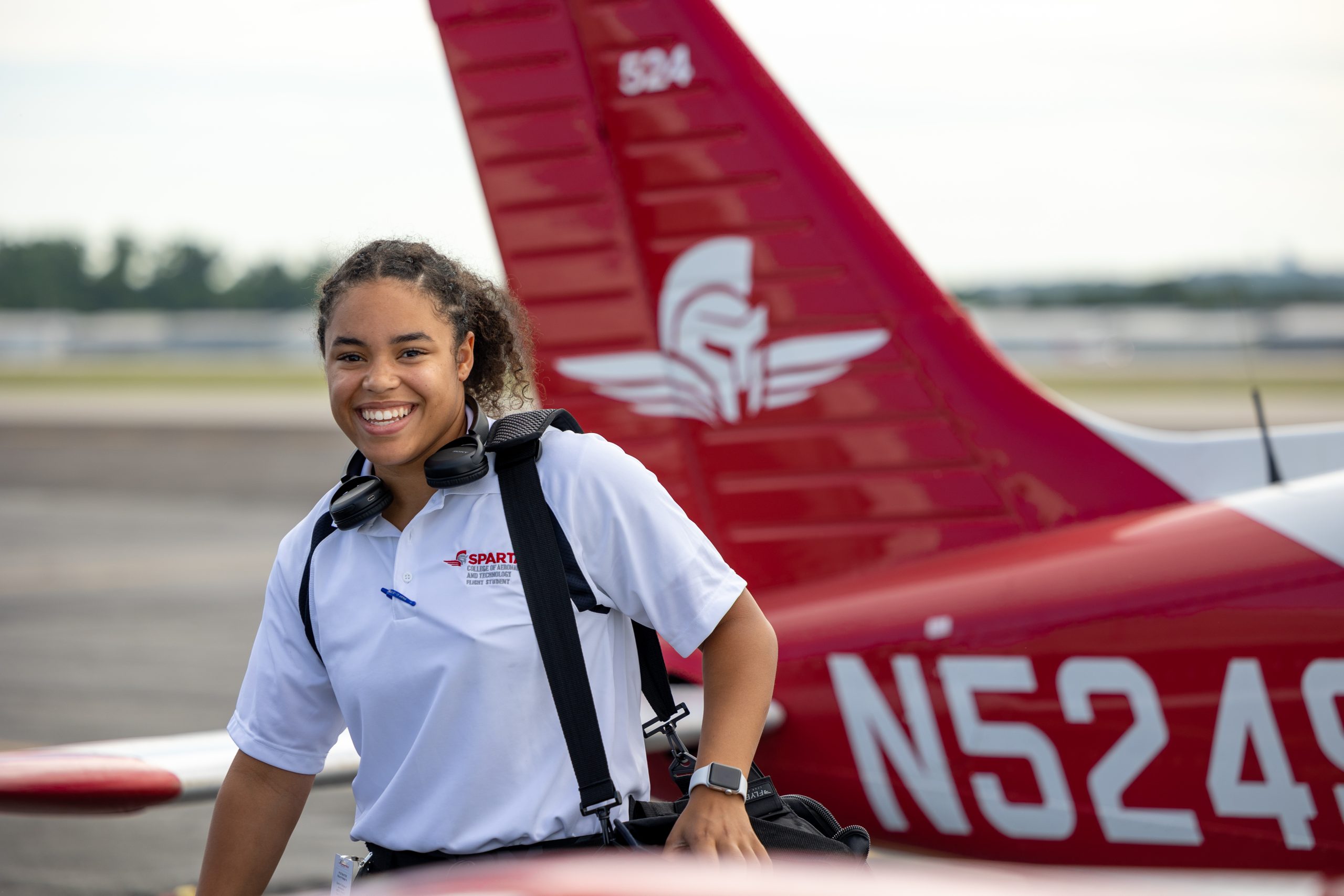 Earn your Associate Degree in as Few as 17 Months

Complete your associate degree in Aviation Flight at Spartan College while preparing for 6 FAA certifications and ratings exams. If your ultimate goal after completing your training is to be an American Airlines pilot, then Spartan College can get you started on your pilot journey. Our aviation flight training program and instruction are comprehensive, giving you the opportunity to learn the topics and skills necessary to be a safe and qualified pilot.

Fill out the form below and take steps towards your pilot journey.

Our equipment has been selected to provide the necessary education and training that will enable students to be prepared both technically and professionally for entry-level aviation positions. Training to become a pilot at Spartan College will give you the experience needed to sit for Private Pilot Certification, Instrumentation Rating, Commercial, and Certified Flight Instructor (CFI) modules, which are included in the program. 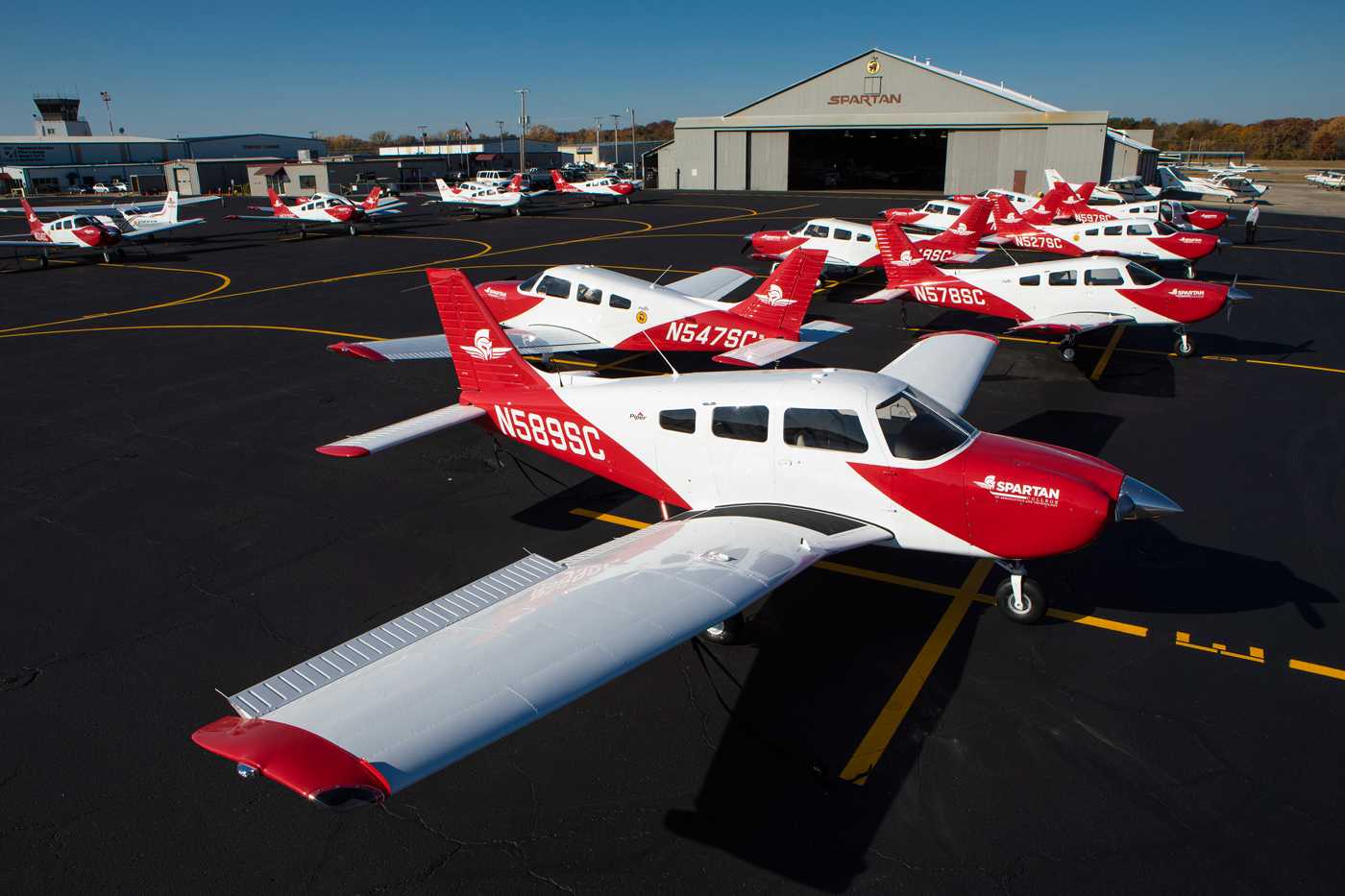 The following options are available for students who are relocating to Tulsa, Oklahoma for their training:

Student housing availability is limited and is filled on a first come first secured basis. For married students and students with family, we offer an apartment referral service.

*The Spartan Residence Hall (SHR) is a student apartment style complex under the College’s control and within walking distance of the main campus. Availability is limited on a first secured basis and not guaranteed. Approx. cost, subject to change, $500 per month, per student, for 4-student occupancy apartment. For more info: www.spartan.edu/tulsa/student-housing

Located only 10 minutes from downtown Tulsa, Riverside Park Apartments offer a strikingly beautiful location on the St. John's River. With direct and easy access to the South River walking trail and Helmerich Park, this location provides many fun, outdoor activities to enjoy. Our apartments are located within Tulsa's #1 rated Jenks School District, and are welcoming to pets like cats and dogs.
Apartment complex is not affiliated or owned by Spartan College of Aeronautics and Technology.

Breathtaking views, beautiful sunsets, and luxurious living are waiting for you at Nickel Creek Apartments. Our one and two bedroom apartments and lofts for rent in Tulsa, Oklahoma, combine spacious and bright rooms with convenient features designed for modern living. Our community sits on lush grounds and offers residents the ideal relaxing retreat from the city with our enticing amenities. At Nickel Creek Apartments, life is how you dream it.

Enjoy the comforts of a community designed with you and your lifestyle in mind. No matter how your day looks, you’ll always find an escape from your routine right outside your home. A sparkling swimming pool surrounded by a relaxing lounging area, a state-of-the-art fitness center, and an executive business center are just some of the perks you can enjoy as a Nickel Creek Apartments resident.

Apartment complex is not affiliated or owned by Spartan College of Aeronautics and Technology.

Village On The Green

Enjoy a cozy and quiet lifestyle at Village on the Green.​ ​Your new home is just minutes from the Creek Turnpike and Highway 75 for all your commuting needs and near cute and quaint downtown Jenks featuring restaurants and shopping. Enjoy an evening stroll at the local Jenks Riverwalk Crossing or a relaxing and satisfying dinner on the patio at Jenks’ own Waterfront grill. We are also a short walk to Jenks High School and next door to a park and Splashpad. Also, this is one of the featured communities of Winfield Property Management that you can call as home.
Our community is tucked away from the bustle, providing residents with a stunning home near all the Jenks attractions yet with a cozy “off the beaten path” feel.
Apartment complex is not affiliated or owned by Spartan College of Aeronautics and Technology.

In 1928, Spartan College of Aeronautics and Technology was founded in Tulsa, Oklahoma as Spartan School of Aeronautics by W.G. Skelly, President of Skelly Oil Company, on September 27, 1928. He established Spartan Aircraft Company and formed the corporation which built Tulsa Municipal Airport (now called Tulsa International Airport).

During World War II and the Korean War, Spartan School of Aeronautics trained pilots and mechanics for our armed forces and allied forces, including the British Royal Air Force, while continuing expansion in the civil aviation field.

The American Airlines Cadet Academy (AACA) is intended to provide AA with a pipeline of prospective pilots. The AACA is available to AACA cadets who are eligible to enroll in the Aviation Flight Degree Program (“Program”) at Spartan College. AACA terms and availability may be subject to change. Spartan students in the AACA may be eligible for additional financing options for those who qualify. Spartan College is not a party to any contract between American Airlines (AA) or AA credit union financing and the student. Graduates of the Program are not eligible for employment as a pilot with AA until logging 1,250 flight hours post-graduation. Employment with AA is not guaranteed.