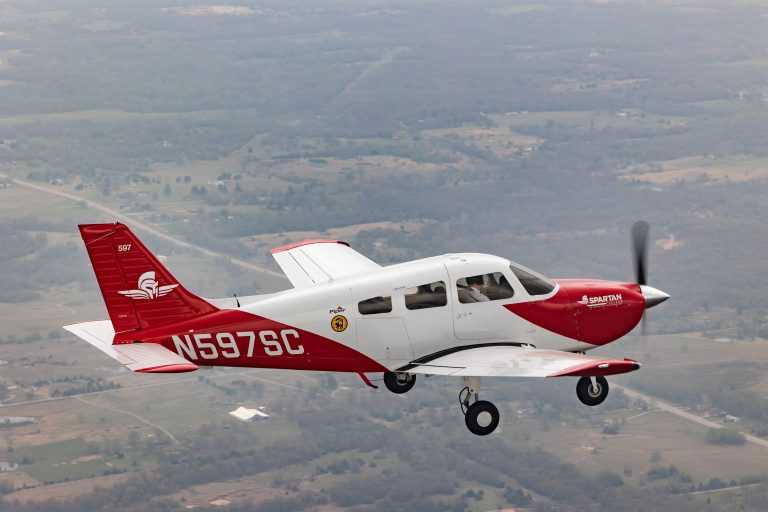 Entering the world of aviation is like entering another country. It has its own people, its own customs—and its own language. This article provides a sample of some of aviation’s most common terms, with definitions.

Altimeter: A device similar to a barometer that measures atmospheric pressure to show an aircraft’s altitude above MSL.

Altitude: The height of an aircraft, measured either as AGL (above gruond level) or above MSL (Mean Sea Level). “Absolute altitude” refers to

Axes of Flight: There are three axes of flight, each with their own name. Pitch refers to the up-and-down movement of a craft, Yaw the side-to-side movement, and Roll the action around the central axis.

Bernoulli Principle: A principle of fluid dynamics first described in the 1730s by the scientist Daniel Bernoulli. Applied to aerodynamics, the principle explains how air flowing over an airfoil (a surface curved at the top and flat at the bottom) can generate lift. The curve on top of the airfoil disrupts the flow of air, lowering the pressure above the wing, while the straight bottom of the airfoil results in high air pressure below the wing. This higher pressure underneath pushes the wing—and the aircraft—upwards.

CFI (Certified Flight Instructor): Refers to a commercial pilot license holder who has passed additional tests and practical exams to earn an FAA rating allowing him or her to train other pilots. You may also see a CFII, referring to instructors who can teach others to fly using instruments. Other instructional ratings, like helicopter, single- or multi-engine, etc. are also available.

FAA (Federal Aviation Administration): The division of the Department of Transportation concerned with aviation. The FAA operates Air Traffic Control and regulates everything from aircraft manufacturing to pilot training to airport operations.

Flight Plan: Pilots must file a detailed plan with flight service stations giving their aircraft number, type, estimated plan of departure, time en route, and arrival, number of passengers or cargo aboard, etc. This can be filed in person, via radio, telephone, or computer.

Fuselage: The main body of an aircraft, where passengers, crew, and cargo ride.

Gross Weight: The fully-loaded weight of an aircraft, also known as “takeoff weight”, which includes the weight of passengers, cargo, and fuel.

IFR (Instrument Flight Rules): The rules governing flight under low-visibility conditions, when pilots must rely on instruments within the cockpit to navigate correctly. Pilots need to hold an Instrument Rating (IR) to fly under instrument conditions. Flights operating under IFR are monitored and guided by Air Traffic Control.

Pattern: The direction of aircraft traffic around an airfield, supervised by radio or ATC.

SMOH: An acronym used in reference to the operating hours of an engine “since major overhaul”.

Slipstream: The air stream generated by a propeller or rotor.

Transponder: A transmitter-responder device on an aircraft that automatically gives details about a craft’s altitude and position in response to a query signal from transmitters on the ground. Transponders identify aircraft to air traffic controllers and can also be part of collision avoidance systems.

Yoke: On an aircraft, the yoke is the equivalent of a car’s steering wheel.

Whether you want to be a pilot, an aircraft mechanic, or an avionics technician, you’ll need to be fluent in the terms, acronyms, and phrases commonly used by the people who keep air travel moving.