Get Your “Six Pack”: Aircraft Instrumentation, Communication and Navigation 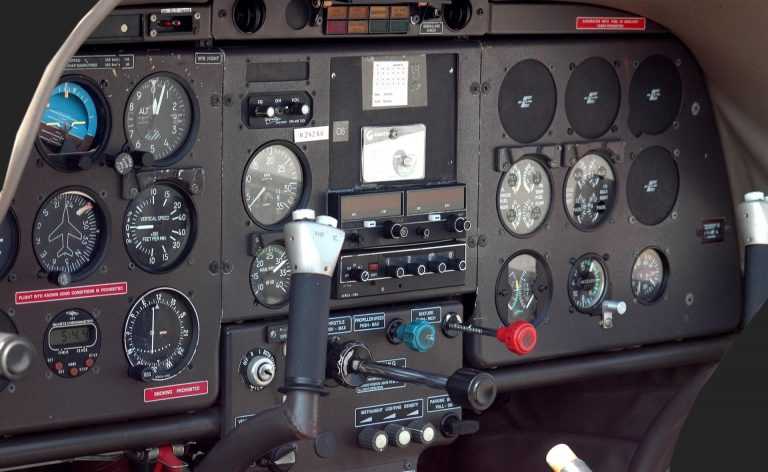 April 5, 2021
Get Your “Six Pack”: Aircraft Instrumentation, Communication and Navigation

There's an old saying in the field of aviation: "Trust your instruments!" And there's a good reason for this saying. A pilot needs to rely on the aircraft instrumentation in order to safely arrive at their destination and land the plane. All of the aircraft navigation instruments, flight instruments, and engine indicators need to be working together correctly to pull off a successful flight.

Whether your goal is to earn your pilot's certificate or to train to become a skilled aviation maintenance technician working on the ground, you will need to achieve a level of expertise with all those instruments. Here's a brief snapshot of the various airplane instruments and why they're important for safely operating a plane.

Way back in 1937, Britain's Royal Air Force identified six crucial flight instruments that should be included in all of its planes. These flight instruments are known as the "six pack." It can be a bit intimidating to look at all the airplane instruments in a cockpit the first time; but once you learn the location and purpose of the "six pack," you will start to have a better understanding of the layout.

The ASI is similar to the speedometer in a car. It tells the speed of the aircraft in either knots or miles per hour. A needle on the ASI points to the current air speed, while the dial on the ASI is color coded. The color scheme of the dial is universal, and it relays additional important information about flap settings, stalls, and more.

You may have heard of this flight instrument referred to as the artificial horizon. This clever instrument tells the pilot the plane's attitude in relation to the horizon, and it's operated by an internal gyro inside the plane. The gyro is a rigidly fixed system, so if the plane changes its attitude or pitch, that becomes displayed on the attitude indicator. This is critically important for the pilot when operating in dark or low visibility conditions.

When you think about it, one of the most important pieces of information a pilot can have is, "How far above the ground (or ocean) is my plane?" The aircraft altimeter uses barometric pressure outside the plane to answer this critical question. It displays altitude above mean sea level and displays it in variants of 100s, 1,000s and 10,000s.

This flight instrument uses another internal gyro in a plane to indicate the plane's roll rate and stabilized rate of return. A silhouette of a plane shows the pilot the rate of a turn in degrees, as well as the direction that the plane is turning. If a pilot wants to be able to turn the plane safely and with plenty of room to spare (for obvious reasons), the turn coordinator is what helps with this.

This is another straightforward cockpit instrument. It tells the pilot what direction they're heading on the plane's magnetic compass. It shows a plane with its nose pointing at a 360-degree compass card, with "North" always set to 0 (zero).

While the airspeed indicator relays the speed of the plane horizontally, the VSI tells the pilot how fast the plane is descending or climbing. If the plane is level, the VSI needle points to 0 (zero). If the plane begins to climb or descend, a diaphragm expands or contracts with air pressure, which is relayed to the VSI and displayed in hundreds of feet per minute.

Those are the main flight instruments that make up the "six pack" in the cockpit. You may have noticed that many of these systems, as they were originally designed, did not rely on the plane's electrical systems to function properly. This was intentional in older analog flight systems!

If a plane's electrical systems had a problem, the goal was for the pilot to still be able to glide the plane to the ground and hopefully walk away safely. By creating systems that relied on air pressure, barometric pressure, and internal gyros, aircraft became much safer to operate in "interesting" or scary situations.

More modern flight systems have an advanced electrical system operating the "six pack" and other instruments, but there are usually redundant "analog" systems as a backup in planes for safety. You'll learn about all these and more at Spartan College of Aeronautics and Technology, whether you're enrolled in Flight Training School or our Aviation Maintenance Technology program.

Decades ago, the only navigation instruments that planes had were rudimentary radios (operated by vacuum tubes), a clock, and a compass. Today, pilots rely on a combination of digital electronics systems, satellites, and modern radios to help them safely travel from "Point A" to "Point B."

Flight is now a safer activity than ever before, thanks to planes, pilots, and avionics technicians utilizing these navigation instruments:

Want to know how far away your plane is from points of interest, such as that mountain over there? The DME tells you using a system requiring both aircraft-installed and ground-based equipment.

Satellite triangulation tells the pilot the exact position of the plane on the globe, using a system that is totally independent of (and unaffected by) the weather. The FAA has developed an additional system called the Wide Area Augmentation System, which made the availability and accuracy of GPS even better.

The Heading Indicator (HI) described above is also considered one of the main navigation instruments. There are additional and more complex navigational systems that are utilized by US military aircraft and the Department of Homeland Security, but these systems are usually not included in civilian training programs.

Some additional navigation instruments that aviation electronics (avionics) technicians become proficient in include the Automatic Dependent Surveillance-Broadcast (ADS-B), a next-gen precision application for pilots and ground controllers; the Emergency Locator Transmitter (ELS), for pilots to send out a distress signal; and the Angle of Attack Indicator, which helps the pilot to avoid putting the plane into an unsafe situation.

The fleet of Piper Archer TX, Piper Seminole, and Cessna 172R planes flown out of Spartan College's flight facility in Tulsa all have reciprocating engines. The engine instruments displayed in these types of planes include Oil Pressure, Oil Temperature, Cylinder Head Temperature, Manifold Pressure, Fuel Quantity, Fuel Pressure, Tachometer and Carburetor Temperature. In order to work on these instruments and systems within an aircraft's engine and cockpit, one needs training in Aviation Maintenance Technology.

This post only scratches the surface of the instrumentation and systems in today's planes. Flying and maintaining a modern aircraft requires more specialized technical training than ever before. If you're interested in learning more about training in avionics, aviation, or to become a pilot, contact us at Spartan College to arrange a tour or start the enrollment process!