J. Paul Getty took ownership of Spartan in the 1930′s and inspected the Spartan Factory and School for the first time on December 7, 1939. Peek writes, “(Getty) was greatly impressed by ‘captain’ Max Balfour. He was running a . . . school training hundreds of army cadets, and appeared to be the kind of manager Getty appreciated. After this one-day visit, Getty left for the west coast, and did not return for over two years.

“When the war started in December of 1941, J. Paul Getty immediately tried to enlist. Knowing the navy’s penchant for bestowing commissions on the rich and famous, he went to Washington to contact Frank Knox, the Secretary of the Navy . . . Knox told Getty that his age, now 49, would preclude receiving a Navy commission, but that he should turn his talents to managing the Spartan company. Knox said:

‘The most useful thing you can do for the Navy and your country is to forget about putting on a uniform, drop all your other business activities, and take over the personal management of Spartan.’

“Thus it was that J. Paul Getty came to Spartan on that cold morning in February, 1942 …For the first several weeks, he spent all his time learning every facet of his business. He asked questions of the men on the plant floor, and poured over the statistics from the various departments. Each night he would take a packed briefcase home to his suite in Tulsa’s finest hotel, the Mayo. Always able to learn quickly, he was soon able to discuss with confidence many of the technical processes involved in aircraft manufacturing.

“When he had decided what was needed, he moved quickly… [His changes] brought immediate results. In March, it was announced that seven NP-1 trainers had been delivered to the Navy in one day. A publicity blitz in April described the presentation to the Navy of a “donated” NP-1; the materials furnished by Spartan, and the labor given by the plant workers.

“By the spring of 1943, Spartan had built another large, 300,000 square foot addition to its factory to take care of additional sub-contracting business, much due to the B-24 plant nearby…this plant expansion and those that followed would make Spartan a major subcontractor to a number of the nation’s largest aircraft manufacturers. By the time the war ended in 1945, they were employing 5,550 workers, and had gained a reputation for quality and efficiency. In addition to building the NP-1 trainers, they had made rudders, ailerons and elevators for 5,800 B-24 bombers, hundreds of wings for Grumman fighters, thousands of control surfaces for the Douglas dive bomber and 2,500 engine mounts for the Republic P-47.” When their war production ceased, on June 25, 1945, with the production of the last B-24 aileron, Getty would say, “I like to think that I have made a worthwhile contribution to America’s war effort, without thought or possibility of financial profit.”

In addition to this remarkable production record for such a short period, Spartan school trained over 16,000 pilots, mechanics and other technicians during this time. 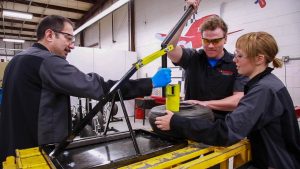 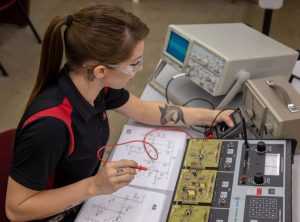