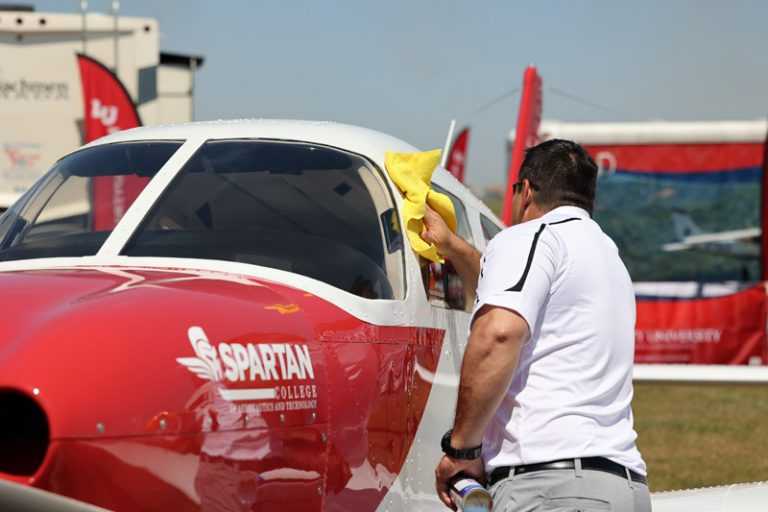 Wisconsin is expected to draw more than half a million spectators to the Oshkosh air show this year with its incredible lineup of events. Spartan College of Aeronautics and Technology is happy to say that we'll be on-site in Oshkosh, WI to share information with aviation enthusiasts.

Keep reading to learn more about one of the best air shows in the world, why you'll want to stick around for the nighttime events, and why you should make a point to stop by booth 68!

Oshkosh, Wisconsin is a relatively small American town with a population of around 67,000 people. So, it's hard to believe that the air traffic control tower at the local airport becomes the busiest frequency in the entire world during the last week in July every year (2020 excluded). But it's true, and that is entirely because of the Experimental Aircraft Association's (EAA) AirVenture show, otherwise known simply as the "Oshkosh Air Show."

More than half a million people from 80 countries are expected to fly into the Oshkosh area this year from July 26th through August 1st for the air show. Wittman Regional Airport and Pioneer Airport in Oshkosh are where the bulk of the planes will be flying to, and the seaplanes will be landing on Lake Winnebago near Black Rock, WI.

The annual airshow is a great chance for people to catch up with old friends while celebrating the history and future of aviation during this spectacular event. More than 10,000 aircraft will be flying into Oshkosh for the air show this year, so it's no exaggeration to call this the biggest celebration of aviation in the world.

What kind of aircraft are coming? Fighter jets and bombers, ultralights, drones, one-of-a-kind experimental aircraft (no UFOs -- as far as we know!), seaplanes, home-built kit aircraft, jumbo jets, zippy little acrobatic planes, and... did we leave anything out? Probably, but even if we don't mention a certain type of plane, there will likely be one or more examples of it at the Oshkosh air show in 2021!

We can only base the expected turnout numbers for 2021 on the numbers from the 2019 Oshkosh air show, but they are expected to be huge again this year. In 2019, more than 642,000 attendees showed up for the air show — nearly ten times the normal population of Oshkosh! If you're reading this now, it's probably too late to get a hotel reservation for the 2021 show. Your best bet for "lodging" is to plan to camp out with the tens of thousands of attendees staying in campgrounds or onboard their own planes!

The airport in Oshkosh averaged 127 takeoffs and landings during the 2019 show as more than 10,000 aircraft arrived to participate in and/or simply attend the air show. Those numbers in 2019 included more than a thousand home-built aircraft, 400 "warbirds," 939 vintage historical planes, 188 ultralight or light-sport aircraft, more than a hundred seaplanes, 62 aerobatic planes and seven aircraft that could only be classified as "other."

Since we haven't mentioned it yet, the Oshkosh air show is a family friendly event. Kids 18 and under get in totally free every day of the show, which aims to inspire even more folks to become a part of the aviation field. Hint: Stop by booth 68 to learn more about how kids and adults alike can possibly train for an aviation trade at some point in the future! This year marks a number of important aviation anniversaries, so expect to see those historically depicted during the daily air shows in Oshkosh.

This year, 2021, marks the 75th anniversary (plus one) of the end of World War II. Warbirds and important planes from both the Pacific and European fronts will be featured in the afternoon shows, which are an annual favorite of many attendees in Oshkosh.

This year also marks the 40th anniversary (plus one) of the Kolb experimental ultralight aircraft, so expect a lot of owners to be flying these special planes into Oshkosh. Stinson aircraft are celebrating their 100th anniversary (plus one) in 2021, and it's the 70th anniversary of the Piper PA-22 Tri-Pacer aircraft. Spartan College just acquired over 25 new Piper Archers for training students and you can see and sit in one at booth 68. Other significant anniversaries will be celebrated by Taylorcraft, Aircoupe, Aeronca Chief, Globeswift, and others.

US Air Force Special Operations planes will also be featured at the air show, the Orbis Flying Eye Hospital, and many other special events. You can also check out the on-the-ground seminars and workshops. (Stop by booth 68 for information on how you can train to become a part of the aviation industry's future.)

What's better than a nighttime fireworks show? A nighttime show with fireworks blazing off the wings of aerobatic aircraft and vintage replicas of World War I biplanes!

Trust us on this one: You've never seen a real fireworks show until you've attended the air show in Oshkosh. The Night Air Show, which happens on Wednesday and Saturday nights, is one of the most incredible evening displays that’s included in your daily ticket price. Don't miss it!

Aviation movies are shown outdoors every night at the Fly-In Theater. It's like a drive-in movie theater, but you can bring your lawn chair or a blanket to enjoy the shows. Another crowd pleaser is the Fly-In Flight Fest, where bush aircraft show off their skills just after dark every night from Monday through Friday.

And here's some great news: All the nighttime events at the Oshkosh air show are included with your daily ticket price.

Adventure, innovation, and amazing feats of derring-do will be available for all Oshkosh air show attendees who stop by booth 68 this year! Actually... that's just our booth. But we still encourage all aviation enthusiasts to stop by and say hello.

Spartan College of Aeronautics and Technology is proud to once again be a part of the EAA AirVenture 2021 show and our staff will be at booth 68 every day. If you're interested in the field of aviation or looking for an occupational path that involves the aviation industry, Spartan College can provide the training needed to realize your dreams.

We've been training pilots and technicians for nearly a century now. With campuses in Oklahoma, Colorado and California, Spartan College offers programs in a variety of aviation-focused programs.

If it's your dream to one day fly into Wittman Regional Airport at Oshkosh as part of a future air show, why not enroll in Spartan College's Aviation Flight program at our Tulsa, Oklahoma campus? We offer all the training necessary to earn your pilot's certificate (AKA your pilot’s license). If you're dazzled by the RC aircraft and drones at the Oshkosh air show's RC Flying Field, ask about our Aviation Electronics Technology program. If you want to be able to build and maintain your own personal aircraft, our Aviation Maintenance Technology program might be just the ticket for you.

Our friendly admissions representatives will have all the information needed about aviation industry training programs for anyone who stops by. Spartan College is looking forward to talking with all of our fellow aviation enthusiasts, and alumni at the Oshkosh air show this year, so stop by booth 68 and say, "Hi!"

Spartan College offers programs geared toward career-oriented training in the aviation industry. Click here to learn more about our programs and consumer information.