What Is eVTOL?: Electric Vertical Take-off and Landing 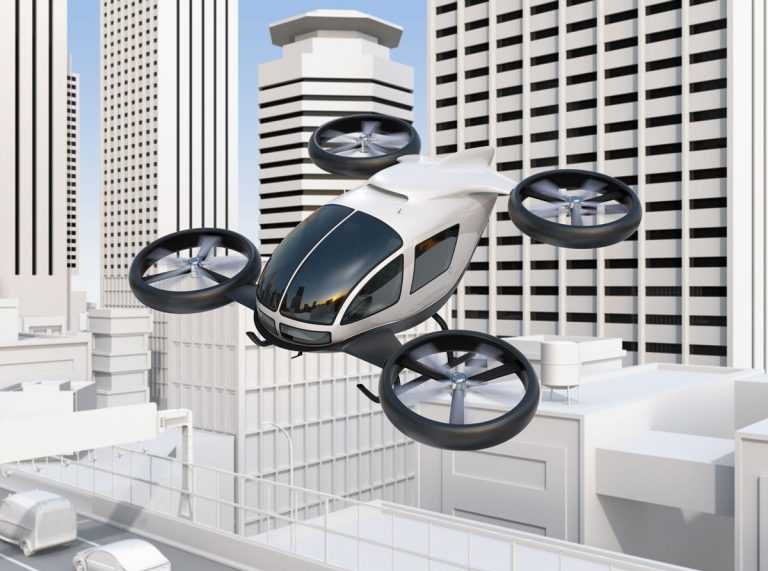 February 8, 2021
What Is eVTOL?: Electric Vertical Take-off and Landing

The dream of flying cars has, until recently, been just a dream. For small flying transport to be useful and maneuverable, vertical take-off was a necessity. Most cities don’t have the space to afford a runway for every vehicle.

The future of aerospace mobility heavily relies on electric vertical take-off and landing (or eVTOL). After decades of projects that failed, a new vehicle class is beginning to emerge. If eVTOL aircraft reach mass-adoption, it will change the way we move people and cargo.

Quickly following the success of smaller drones for filmmaking, photography, and military use – eVTOL was born. The future of safe on-demand aircraft travel is near.

At Spartan College of Aeronautics and Technology, we eat, breathe, and live everything aviation. It’s the innovation surrounding eVTOL — and our students interest in it — that led us to explore the intricacies of the blossoming technology.

Safety and cost are the two biggest hurdles in eVTOL development. But eVTOL already has significant advantages. Electric aircraft can be fully autonomous, environmentally friendly, and quiet.

Knowledgeable industry players estimate that there are around 200 eVTOL development programs. Let’s take a more in-depth look into what eVTOL is, how it works, and what the future of air-transport holds.

Electric vertical take-off and landing (eVTOL) is one of the newest innovations in the aerospace industry. eVTOL vehicles are electric and function much like a drone. Large omnidirectional fans help the aircraft move in any direction and even takeoff vertically. While designs vary between developers, most seem to resemble the form of a drone.

It remains to be seen whether companies will opt for a design featuring rotor systems or electric propulsion. Only one developer has invested in a fixed-wing aircraft.

Still, for an eVTOL to function as an ‘air-taxi,’ vertical takeoff is a necessity. Another critical element of eVTOL flight is the transition between vertical and forward flight.

Nearly a decade ago, NASA scientists hypothesized that the next vertical flight era would feature distributed electric propulsion.

Uber intends to build the third dimension of its business model, following the success of taxies and delivery services. Uber Elevate’s white paper on eVTOL aircraft details the following specifications:

No eVTOL concepts involve a structure similar to a helicopter. This is undoubtedly a disruption in the future of vertical flight.

Despite eVTOL’s quiet nature, the cabins will feature noise-canceling technology for a comfortable flight. However, it seems that most electric propulsion is quiet, to begin with. For example, it’s already difficult to hear a Tesla approaching beyond the noise of traffic.

The plan seems to be to arrive at a fully autonomous aircraft. But for the time being, concepts will be piloted. The key factor in the usability of the eVTOL aircraft will be operating cost.

If Uber or other companies like Bell Helicopters can keep operating costs low – the concept is a real possibility. Fuel options remain undetermined. Most developers aim to use purely electric power, but hybrid systems and even Alaka’i’s hydrogen fuel cell-powered eVTOL are possible.

6 Elements of an eVTOL Future

In 2019, Deloitte published a research paper outlining the barriers to eVTOL adoption. In it, they detail what stands in the way of the future of aircraft mobility.

eVTOL vehicles have applications beyond the ‘air taxi.’ Future possibilities include inter-city transport and cargo shipping possibilities. For companies like Amazon, already invested in drone delivery testing, the eVTOL could further reduce costs and speed up delivery.

But before that future can be realized, there are significant hurdles to overcome. These hurdles are mostly similar to what stands in the way of autonomous car adoption.

Any autonomous vehicle will have to undergo legal regulation before it can be released to the public. The complexities behind regulating autonomous cars are numerous. Even now, regulations for autonomous cars have proven a significant obstacle.

With an aircraft, there are fewer cues that the vehicle can follow. eVTOL’s will have to develop flight plans and communicate with other aircraft.

Even before autonomous electric aircraft, companies will have to deal with pilot certificates. Pilots will need to obtain certificates just as they would for any other aircraft. Evident to anyone in the airline industry, there are also stringent certifications to uphold.

The development of eVTOL will have to coincide with the adoption of 5G and the Internet of Things. Aircraft will need to communicate with each other and any control centers.

Onboard sensors and collision prevention systems will need IoT integration too. Real-time information on location and maintenance requirements are crucial. Situational awareness for aircraft that can move in all directions is no easy feat.

Beyond that, efficiency is a big question mark above the new technology. Propulsion remains a topic of disagreement between stakeholders. The factors that are most important for efficiency are:

While we have plenty of airports, they are usually not located in the middle of busy cities. Passengers will use eVTOL aircraft for short-distance trips too. Takeoff and landing zones will have to be constructed all over big bustling cities.

Infrastructure changes will also need to include areas to charge the aircraft. As it stands, electric charging stations, much like the ones used by Tesla cars, seem most probable. However, if other fuel systems will be preferred in the coming years, those plans could change.

The aircraft will also need infrastructure when not in use. Maintenance hangers or parking lots will need to be built not far from central hubs.

The infrastructure challenges for a communication system are also significant. Cities and municipalities will have to plan locations as early as possible alongside technology vendors and regulatory authorities.

The only way that eVTOL aircraft will achieve mass adoption is with an exemplary safety record. Training centers like Spartan College will develop and adapt programs for the certification of new aircraft. With such different technologies and designs in play, this makes for an exciting study.

Flying in a small aircraft with a pilot is an intersection between taxi travel and commercial air flight. But autonomous vehicles are a different ball game altogether. There is still a psychological barrier for autonomous automobiles – a phenomenon that will prevail with autonomous eVTOL aircraft.

Nearly half the respondents in the Deloitte survey see eVTOL aircraft alleviating road congestion. Yet 80% of respondents also think that electric aircraft are unsafe.

Shaping and easing consumer opinions will be a steep learning curve for investors.

The difficulty here is that private, competing companies will need to work with each other to keep the skies safe. Regulations are necessary to ensure that new ‘airlines’ stick to the rules.

Establishing an unmanned air traffic management system is complicated. There are many interest groups with competing services and aims. Three key elements will make this possible:

Despite all these challenges, the race for air-domination is already knee-deep. Uber plans to establish an on-demand urban air-transportation service. They plan to repurpose the roofs of parking lots and rent vacant land next to highways.

Uber plans to lure consumers from the roads to the skies with low mile-seat costs. While the eVTOL market has already profited from the widespread use of drones – PAV (or passenger air vehicle) is the next frontier.

Mark Moore, Uber’s engineering director of aviation, left NASA to help drive aeronautical progress. He estimates the cost to develop each working concept at around $10-$20 million.

Uber is currently working with at least six aerospace companies:

It will be interesting to see how the interplay between big tech and aeronautics works in practice. Until this point, it has historically taken roughly ten years for an aircraft design to be cleared for commercial flight. That is a pace that tech companies are not likely to settle for.

We hope that safety won’t be sacrificed in the race to make a profit and monopolize the skies. Let’s take a brief look at other players in the eVTOL space.

Aurora Flight Sciences revealed their two-set eVTOL vehicle with four electric propellers and a propulsion motor. The canard, wing, and tail can propel the aircraft up to 124mph. The aircraft has already been able to demonstrate the transition between vertical and forward flight.

Aurora designs for efficiency and bases concepts on existing technology – focusing on battery capacity. They estimate that at around 20m, the noise of takeoff will be negligible. When in cruise flight, the aircraft will be inaudible from the ground.

Aurora is aiming at an average commuter distance of 25 miles.

Bell signed as a partner to Uber Elevate and is busy developing the first urban air taxi. The company plans to keep the cabin ‘modular’ and interchangeable for different Uber services.

Like Aurora, Bell’s executive VP for technology and innovation says the focus is on technologies that already exist. Using electrical power allows the company to modulate external noise.

A Google search of ‘eVTOL’ will likely turn up Lilium’s latest design. The electric fans are hidden within the flaps of Lilium’s new five-seater concept.

Lilium has already flown its first two-seater aircraft called the ‘Eagle.’ Given the model’s low drag coefficient, the transition from vertical to forward flight was smooth. Each fan is designed for simplicity and therefore produces little to no vibration.

Fan cowling aims to contain any potential blade loss, and the entire aircraft is fitted with a parachute.

Their eVTOL aircraft will have a cruise speed of 186mph with energy consumption similar to an electric car.

One of the most interesting things to note about eVTOL innovation is the change in consumer lifestyle. With an eVTOL, our radius of daily travel will expand significantly. Such a change is comparable to going from a bicycle to a car.

The Lilium eVTOL will be able to take a passenger 70km in 15 minutes. By car, through a busy city, a passenger would only travel 12km within the same time. Lilium aircraft can travel 186 miles at 190mph on a single charge.

As with any technology, the time will come when eVTOL becomes the norm – but probably a little later than expected. Deloitte predicts that after 2030, we will already be venturing into autonomous eVTOL aircraft.

If you’re interested in aeronautics, then Spartan College of Aeronautics and Technology may be the home for you. Established in 1928, our College has trained over 100,000 pilots and technicians – through all forms of technological progress.

We are looking forward to when eVTOL aircraft takeoff! If aeronautics and technology training sparks your drive, contact us to find out more about our programs.